He has written, developed and/or tested recipes for myriad groups and individuals including the following:

The News and Observer

Morrison Management Specialists (A Division of the Compass Group)

Chef Sanjeev Kapoor's "How to Cook Indian: More Than 500 Classic Recipes for the Modern Kitchen"

Brian honed his skills at high-profile New Jersey restaurants, such as Chris’s Grill House, Puccini’s, and the Sonoma Grill before joining the Five-Diamond Award winning team in the Hilton at Short Hills, NJ. While there, he cooked in the Four-Diamond, the Three-Star Terrace Restaurant, and the Five-Diamond, Four-Star Dining Room. Brian eventually left to become Sous Chef at Amanda's Restaurant in Hoboken, NJ, which received an “Excellent” rating in all of the Zagat's guides during his tenure. He then rejoined the Hilton Hotel Corporation, serving as Banquet Sous Chef and later as Chef de Cuisine in the Hilton at East Brunswick, NJ. Brian later became an Executive Chef for Morrison Management Specialists, a division of Compass Group. He also served as Chef Consultant for Rao's Specialty Foods and as a Culinary Instructor for Wakefern Food Corporation, where he taught and developed recipes for “hands-on” cooking classes.

Chef Brian has twice cooked at the James Beard House. He has taught at the Holly Springs Farmers' Market, the Chapel Hill Farmers' Market, the Devil's Ridge Country Club, the Ger Nis Culinary Center in NYC, De Gustibus at The Cellar in Macy's Herald Square New York City, the Fancy Food Show at the Jacob Javitz Center in New York City, and live on WHUD 100.7 FM in the Hudson Valley. Chef Brian has also cooked for the Taste of the NFL at the Waldorf Astoria in New York City and the Taste of the Ladies Professional Golf Association at Caesar’s Palace in Atlantic City, NJ. Even more exciting, he had the pleasure of assisting the Lee Brothers with their only Triangle appearance and performing cooking demonstrations on News 12 NJ, Time Warner Channel 10 News, and NBC 17's My Carolina Today.

Brian earned his Bachelor of Science degree from Saint Peter’s College before graduating from the Institute of Culinary Education. He has completed the Lisa Ekus Group's Media Training Course and attended the 2011 Symposium for Professional Food Writers at The Greenbrier. Brian is also ServSafe Certified.

Brian Adornetto is a member of the International Association of Culinary Professionals, the Southern Foodways Alliance, Spoons Across America, the Culinary Historians of Piedmont, NC, and the Association of Food Journalists. 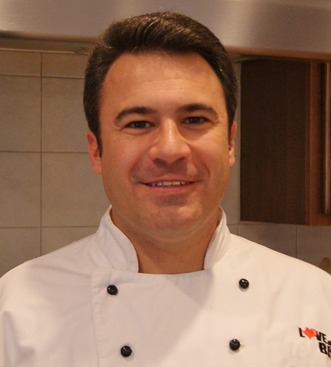